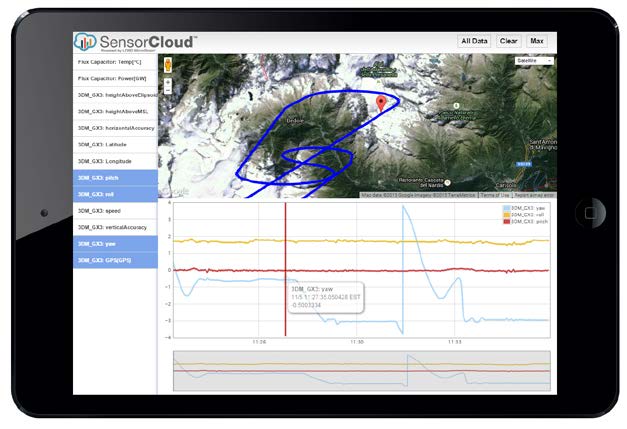 In addition to the successful collection of high quality data, the Boeing team was able to
accelerate the flight test program with significantly reduced expense by leveraging off-the-shelf
wireless technology. The wireless nature of the comparatively affordable technology allowed a
minimally-invasive integration onto the flight vehicle, and MicroStrain SensorCloud™ analytics
enabled a single team of limited personnel to make go/no-go decisions based on nearly real-time
data evaluation. This approach provided augmented decision efficiency, which accelerated flight
test execution by allowing multiple daily sorties and concurrent data analysis.
The Aircraft
The S-100 Camcopter platform is an unmanned Vertical Takeoff and Landing (VTOL) aircraft
produced by Schiebel of Austria (Figure 1). This autonomous rotorcraft is capable of flying with
a 50 kg payload for up to a six-hour loiter time with a service ceiling of 5400m. Operators can
control the aircraft in real-time via a ground-located control station, or the aircraft can fly a
preprogrammed mission completely independent of operator intervention. Boeing Mesa is the
current US-based distributor, and it conducted a flight test program for the S-100 to better
understand and characterize effects on flight critical dynamic and structural sub-systems.