Technology evolves as we improve how information is gathered, analyzed and implemented into various applications. For instance, Vertical Takeoff and Landing aircraft (-VTOL) can take off, hover and land vertically.

Technology evolves as we improve how information is gathered, analyzed and implemented into various applications. For instance, Vertical Takeoff and Landing aircraft (-VTOL) can take off, hover and land vertically. Designing new types of VTOL aircraft, such as an all-electric eVTOL large enough to carry passengers, requires massive data gathering and accurate measurements in a range of environments. Sensors are critical in capturing these key measurements, and for one company that is creating an eVTOL that could save lives, MicroStrain wireless sensor networks aided in that purpose.

A prototype eVTOL created by Beta Technologies, is being designed to deliver human organs for critical transplant operations. Beta Technologies is an innovative startup based out of Burlington, Vermont and is one of the front-runners in the development of eVTOL technology. 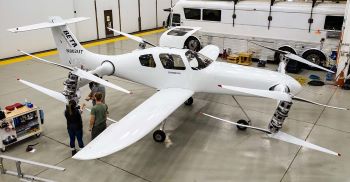 To build a successful prototype, Beta was looking for a sensor system that could monitor several conditions: temperature, vibration and strain. This was needed for component bench tests, as well as in-flight analysis. Additionally, to accurately monitor pitch, roll, angular rate, position and velocity measurements, an inertial measurement unit was required. Parker LORD MicroStrain® sensors have a proven record of working in flight tests for helicopters, fixed-wing and unmanned aircrafts, making them a perfect fit for Beta’s qualification testing. 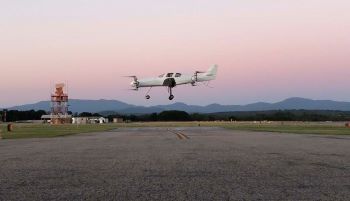 Beta’s prototype design is expected to carry the 4,000-pound aircraft up to 150 miles on a single charge. It is intended to be piloted and be as light as possible, all the while storing and converting energy. It was built with a 35-ft. wingspan and eight 75kW motors for take-off and landing. To achieve flight, four counter-rotating propellers are spun by the motors during lift and vertical takeoff. When the proper elevation is reached, the propellers tilt and the aircraft converts to a traditional flying mode.

All this motion is powered by two 124 kWh lithium-ion battery packs. The prototype reached a maximum speed of 72 knots and 100 ft elevation in more than 180 FAA-approved test flights. 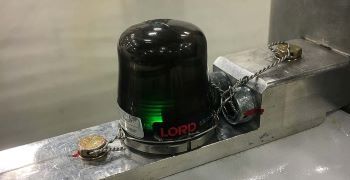 To monitor the prototype’s flight control and flight characteristics, MicroStrain provided three GX5-25 inertial sensors to obtain pitch, roll and angular rate values. Using three sensors provided redundancy necessary in the flight control loop. The sensor data was input to the flight computer, which then controlled the eight propeller motors. Monitoring was done in hover-mode only. These and other outputs of the inertial sensor, such as position and velocity, were also recorded on an SD card and in an on-board computer. The black box flight metrics of the aircraft was also logged. 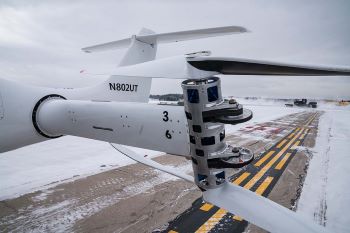 To measure revolutions, a tachometer was used. This also allowed them to produce synchronous FFT plots with the vibration sensors because the accelerometer signals could then be correlated with the phase of the propeller blade.

To help Beta measure strain from centrifugal load and bending, at speeds of up to 1200 RPM and loads from 10k – 20k lbs, ten or more strain gauges were mounted on the top and bottom surfaces of the propeller blades. MicroStrain’s V-Link-200s were employed to measure them in synchronized sampling mode with high sample rates.

In the design of Beta’s prototype, a total of 1500 lbs. of cylindrical lithium-ion battery cells were arranged in six different packs throughout the aircraft. It is important to monitor lithium-ion batteries due to the risks of thermal runaway that can cause fire at about 70°C. Beta monitored the battery temperature by inserting temperature probes into the pack assemblies. This was done up to and during the peak sustained hover power of about 500 kW. To monitor and transmit the sensor data in real-time, two MicroStrain TC-Link-200 nodes were employed

To monitor aerodynamically induced vibration as well as the detection of resonant frequencies, MicroStrain’s G-Link-200 wireless accelerometers were used at high sample rates.

Parker LORD’s combination of MicroStrain sensors offered key test and measurement design data for Beta’s prototype aircraft. Many elements proved a challenge to adequately monitor the aircraft, including the other high-power RF devices in proximity, and difficult to monitor locations such as on rotating components. Nevertheless, MicroStrain’s sensors were there to deliver the feedback Beta needed to continue improvements on the prototype.