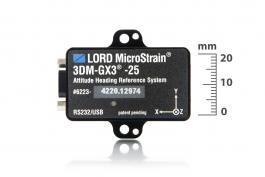 What PPS signal is supported on the 3DM-GX3-25?

The input specification for PPS on the 3DM-GX3-25 standard and OEM  is LVTTL (low voltage TTL), 5 volt tolerant.

The -25 has a power regulator that will protect up to 15 volts.

How do I set the 3DM-GX3 back to its default settings?

Using MIP Monitor software, to reset the device to the factory defaults:

This process does not erase any hard and soft iron calibration that may be on the device.

The Hard and Soft Iron Cal software we provide must be used to do that.

How do I write previously saved hard and soft iron calibration coefficients back to my 3DM-GX3?

Our MIP Monitor software, as written, will not allow you to save the 12 hard and soft iron calibration coefficients to a file, and then read that file back into the software to rewrite the values to the inertial sensor.

However, you cand accomplish the task by recording the values that are displayed (or take a screen grab).

This would be followed by using the data communications protocol EEPROM Write command to write the values back into the device.

This would require either a terminal program or the ability to write software, an understanding of how to construct the command packets, and a list of the EEPROM addresses involved.

What is the difference between SINGLE BYTE and MIP protocol?

The main difference between single byte (SB) and MIP is as follows:

The reason we created MIP was the higher reliability for communications and control, plus the ability to have custom data messages.  SB was prone to phantom commands in a noisy environment.  In addition, SB had a limited number of data combinations available.

To move code from Single Byte to MIP with simple applications is fairly painless if you follow some guidelines.

How do I upgrade the firmware on my GX3 inertial sensor?

Can I use dataloggers with the inertial sensors?

Many inertial applications incorporate dataloggers. The datalogger can take many forms: hardware or software, analog or digital, simple or complex, and/or combinations of all. For our purposes, let’s work through a simple-digital-software datalogger. In this case, datalogger software is installed on a computer. The inertial sensor is connected to the computer via an RS-232 communication interface. The inertial sensor is pre-programmed to automatically send data when powered. The computer receives the stream of data and the datalogger software continuously records the stream to a data file.

How can I program the inertial sensor so that it outputs on start-up?

What is Gyro Bias?

Here is a technical note on the subject: http://files.microstrain.com/NumberedTechNotes/Inertial/TN-I0025-3DM-GX3-25-Capture-Gyro-Bias.pdf

What formulas are used to convert between the various orientation data quantities?

Here is a link to a detailed technical note: http://files.microstrain.com/Orientation%20Conversion%20formulas.pdf

Is it possible to use the RS-232 interface of LORD MicroStrain® inertial sensors with a serial port emulator (i.e., with a USB to serial adapter)?

Yes.  We have had good success with several types of off-the-shelf USB to serial port adaptors, such as those from IOGear and Keyspan, which may be purchased through any of the electronics products distributors.

Can the USB and serial interfaces of the 3DM-GX3 be used at the same time?

No – only one can be used at a time.  The device auto-senses which communication signal is attached (USB or serial), and only uses that channel for communications.

Where can I buy additional communication 3DM-GX3 and 3DM-GX3 OEM interface connectors?

LORD MicroStrain® suggests that you purchase additional connectors with your order.

How long can the communication cables be for the 3DM-GX3?

What is the purpose of the double mounting holes on the 3DM-GX3 standard enclosure?

The 3DM-GX3 standard enclosure has been designed with precision alignment holes on the ‘ears’ of the enclosure to allow the user to install the unit with precise alignment to the rest of the components in the user’s application.

Does the 3DM-GX3 require calibration during use?

The 3DM-GX3 is calibrated at the factory.  The user is also provided with Hard and Soft Iron Calibration software to field calibrate the GX3 in situ.  This video further describes the function: http://www.microstrain.com/video/hard-soft-iron-calibration

Important note: Hard and soft iron calibration is not required for the 3DM-GX3-15 and the 3DM-GX315 OEM.  These units do not contain magnetometers.

Does the 3DM-GX3 have an analog out option?

Can I use multiple 3DM-GX3 at the same time?

Yes. Any number of units can be operated by a host at the same time. Several considerations surround this implementation (primarily computing power) and we suggest that you discuss your requirements with LORD MicroStrain® sales or a support engineer.

What are the power requirements of the 3DM-GX3?

For the standard units, here is a link to a detailed technical note: http://files.microstrain.com/TN-I0023_Inertia-Link_3DM-GX2_3DM-GX3_Pin-Outs.pdf

For the OEM units, here is a link to a detailed technical note: http://files.microstrain.com/3DM-GX3-25_OEM_Footprint_and_Connector.pdf

Can the 3DM-GX3 be installed in any orientation?

Yes, there are no limitations.  However, if a user requires a ‘zeroing’ of the axes, this must be done in the user’s external application.  Good practice dictates that the orientation matrix be used to calculate such zeroing.  Please also be aware of the mathematical singularity in Euler angles.

The user should be aware that the Euler angle formulation in general contains a mathematical singularity at Pitch = +90 or –90 degrees. In practice, poor numerical results will be present if the Pitch angle exceeds +/-70 degrees. In applications where the Pitch angle cannot be guaranteed to exceed these values, it is recommended that the orientation matrix output be utilized instead.

Are the 3DM-GX3 sampling rates adjustable?

At what baud rates can the 3DM-GX3 be operated?

Can distortions of Earth’s magnetic field degrade the system accuracy of the 3DM-GX3?

Yes.  The presence of strong magnetic fields or large magnetic materials will distort Earth’s weak local magnetic field and this will influence the on-board magnetometers.  A hard and soft iron calibration software utility is provided to field calibrate the 3DM-GX3-25, 3DM-GX3-25 OEM, 3DM-GX3-35 and 3DM-GX3-45.

The 3DM-GX3-15 and 3DM-GX3-15 OEM do not contain magnetometers and are not affected by hard and/or soft iron interference.

What orientation output formats are available with the 3DM-GX3?

A detailed description of these outputs can be found in the Data Communications Protocol manual of each product.

What communication interfaces are available for the 3DM-GX3?

The standard units support both USB and RS-232 interface.

The OEM units support both USB and TTL.

May I write my own software application for the 3DM-GX3?

Yes. We provide a complete data communications protocol manual which describes in detail each and every command and response that is available with the device.  Applications may be developed in any programming environment (C, VB, LabVIEW, Linux, Matlab, etc.) which supports serial communication.

What software do you provide for 3DM-GX3?

We provide a general application for Microsoft XP/Vista/Win 7 operating systems that configures, reads, displays and saves data generated by the device.  This application (MIP Monitor) supports both the USB and RS-232 communication interfaces.

How is the 3DM-GX3 packaged?

When you initially purchase a 3DM-GX3, a starter kit (SK) provides you with everything you need to get started! SKs include a 3DM-GX3 module, communication and power cables, software, manuals and GPS antenna if applicable.  In subsequent purchases you may only require additional modules or other individual components. Several communication interfaces are available creating several starter kit variations.

No.  There is no upgrade path.

Not what you're looking for? Visit our FAQ page or contact our Sales team.